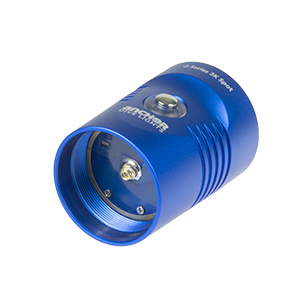 The advanced optics of the LAURENTIC light head (20 degrees) enables wreck divers to see more of the wreck when diving in clear deep waters like the waters of Malin Head, co. Donegal, Ireland. The LAURENTIC is perfect for diving in clear water, both during the day and at night.

The LAURENTIC has a similar intensity as the ARRAN. The increased output combined with the advanced optics produces a less tightly focused beam allowing the diver to see more. The easy to use single button operation controls both the intensity and signalling modes. The incorporated battery indicator also displays the remaining state of battery charge.

The powerful 4,315 lux beam of the modular head can be used as umbilical system boosting the full power burn time to over three hours, which makes it perfect for wreck divers.

Our dive light Laurentic is named after the RMS LAURENTIC a well know wreck lying off the coast of Malin head, Co Donecal Ireland in approximately 45 metres of water. The RMS Laurentic was a 15,000 ton White Star liner that was sunk by a mine during the First World War while on route to Canada with a cargo of gold. It is said that all but 2% was recovered. RMS Laurentic offers great diving for experienced wreck divers.

The LAURENTIC has 3 light modes:

The LAURENTIC has 3 light intensities: