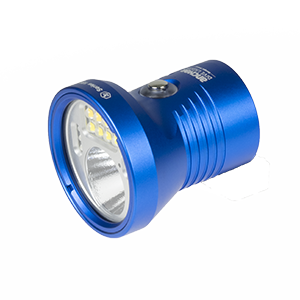 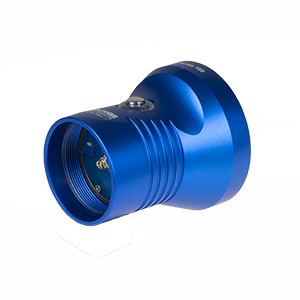 The AUDACIOUS light head is the “All in One”dive light for photographers, cave divers and divers who want the best. We believe this torch has every conceivable feature a diver needs in one light head.

The AUDACIOUS combines the best features of the ARRAN, the CRUIT and the LAURENTIC and puts them together in one light. The color temperature in the wide-cool mode is the same as the CRUIT and the previous Series 5k Spot. This allows a cost effective way to have the ideal video light / photogrammetry system as well as having a great dive light. The only light system you now require is the AUDACIOUS together with the CRUIT mounted on one of our heavy duty trays and set of light arms.

Your existing Anchor wreck or cave canister will work with this light head.

The Audacious is named after the wreck of the HMS Audacious, a 182-metre-long King George
class battleship that hit a German mine on 27 October 1914 and sank to the seabed app 70 metres below. The entire crew was rescued by the crew of the Olympic, a sister ship of the Titanic. Audacious was a “super dreadnought,” an evolution of a design first seen in 1906 that rendered all other battleships obsolete, and fueled the arms race between Great Britain and Germany. It is now a well know dive site for technical divers.

The AUDACIOUS has 8 different light modes:

The AUDACIOUS had 3 light intensities for the wide and the spot: